I know it hasn’t been that long since the last update but I wanted to get another update in before the donation deadline. This update is a little longer than usual, but it is one of my more memorable days on a bike. So if you haven’t read the previous posts you may need to catch up.

I’m still selling sponsorships too. If you made a donation and haven't picked a spot, I may assign one to you or you can let me know. So get your donation in to get a spot on me or my bike.

I woke on day 4 feeling pretty good. Not just-won-the-lottery good, more like slept-through-the-night-without-worrying-about-getting-spooned-by-Roy good. I 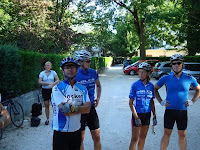 attribute the better sleep to the glasses of local wine I shared with my new drinking buddy, Brigitte, wife of the non-drinking Rutiger. Trying to exhibit good-ole American hospitality, I couldn’t let her drink wine alone. So we made it a point to sample the local wine at each town we stayed. There’s definitely something to be admired about the rural French, they know how to eat and drink

Roy was already dressed, thankfully, and was describing the day’s upcoming ride. He’d diligently studied the route and, like a doctor explaining impending surgery, he gave me an unrequested but obligatory report that he was sure I needed to know. Along with the news he delivered the weather, it would be really hot today. We have three major cols to climb. As best as I can figure a col is French for a mountain pass. It’s probably short for “collapse” because that’s what you feel like doing when you get to the top. Roommate Roy asked if my sore tendon was going to force me to ride in the van. I wanted to say “I’ll be damned if I ride in the van, what do you think I am?” Instead I said the tendon felt fine and I was good to go. I made a mental note to thank Horst for adjusting my seat and alleviating the problem. As we headed out Roy mentioned that he’d let me have the bed by the window tonight since he always got to the hotel before me and always had first pick of the room. Instead of saying thanks, I smugly said, “Maybe I’ll save the window for you.” He laughed the kind of snort-laugh that I used to hear a lot in my high school days that simply said, “That ain’t gonna happen.”

The first climb, much like the days before, I brought up the rear. But something was different this time; I actually could see the leading groups as I was nearing the top. In other words, I wasn’t as far back as I typically was. On the second climb I rolled to the top for a rest just as Roommate Roy was leaving. Four of us left the top of the second col, crossed the valley and started the third climb – Col de Mente. Roy was something like 20 minutes ahead of us.

Col de Mente climbs about 1100 meters over 15 kilometers. Roughly 3400 feet over 9 miles – or in layman’s terms, a Mt. Diablo. There are many switchbacks that zigzag up the face of the peak. After the first couple turns I had to rest and cool off – Roy was right about the weather. As I was resting the other three riders kept going leaving me as the last rider on the hill - crap. I got back on the bike and continued the long hot climb. As I was slogging along, the tour van pulled along side me and a voice that can be only described as a Teutonic angel, in precise German-accented English I heard – “Vould you like some cold vater?”

Petra, whom I befriended on one of our rides a couple days ago, was in the van. She said they stopped at the spring atop the previous mountain and filled the coolers with ice cold water. I replaced the lukewarm water in my bottles and thanked her profusely. I also poured a healthy amount on the back of my neck and felt amazingly revived. If I’d known her better, I would have kissed her.

With 14 kilometers to climb, a voice inside me said something elegantly simple - “Go” As if propelled by a thermal updraft, I went. I knew that this was the last climb for the day and I might as well leave it all on the mountain. I kicked my cadence up to 80 revolutions per minute and dropped into a fast climbing pace. As I climbed I saw the 3 riders that had passed me earlier. They were a couple switchbacks ahead of me. I didn’t think of them I just focused on my rhythm. 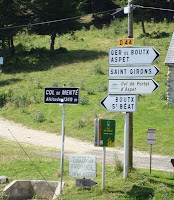 Without any fanfare I slipped past the group leaving them quickly behind me. I thought that if I was riding Mt. Diablo back home that this would be one of my personal best rides. I was in the zone. In every westbound switchback I would take a drink of Petra’s ice cold water – in every eastbound switchback I’d pour a little water on the back of my neck. I felt like Floyd Landis in 2006 Tour. Go. After doing this for countless switchbacks, I spotted what I never thought I would see.

With 1.5 kilometers to go to the top, I saw Phil and … Roy! Go. I kicked my cadence up to 85 rpm and quickly closed the gap between us. I came upon them said to them as nonchalantly as possible to make it sound like I was cruising, “Hey, how’s it going?” Roy looked around with a look that said “Where the hell did you come from?” Then I said something that was incredibly cheeky – “grab onto my wheel, I’ll give you a pull”. When you’re riding and someone says that to you, it may mean “Get in my slipstream and it will be easier on you.” But oftentimes it means “You can draft off me - if you can keep up.” I may have said it like the former but I suspect I meant it as the latter. Phil didn’t bite, he knew that it was still another kilometer to the top and he didn’t want to blow up. Roy bit.

I took my pace up a few more notches. Roy and I were flying up the 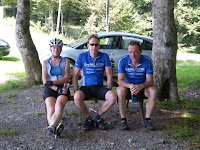 last 800 meters. He was hanging on my wheel. The afternoon sun was beating down. Sweat was flying. I shifted into a couple higher gears and put the hammer down. With that I heard what sounded like the “pfffishhh” sound a compressor makes when it the pressure valve releases. It was Roy making a pronounced exhale as he reached his limit. I cracked him. I pulled away and made it to the top of Col de Mente a few minutes ahead of him.

As we rode into our hotel in Luchon later that afternoon, Roy and I together, Roy said “The beer’s on me tonight, you kicked my butt back there.” For the rest of the trip, Roy was all right. Roy may out climb me on most rides, but today was that day. You know, that day, where everything just works and you can beat the world.

Now here’s the point - You have to keep after it. That’s what TnT and fundraising is all about. There are people fighting for their lives. Some days are bad and some days will be that day. With research more of them will win. This is your last chance to donate so if you are inclined, please consider making a donation. It will give some victim a chance to experience that day.

Steve
Posted by Steve Asche at 12:14 PM No comments: