Third time's a charm
It's the middle of winter, all the trees are bare. Well except for the pine trees, that is. So while everyone else is participating in winter activities like snow skiing, staying out of the cold, working on their needlepoint, and going to hockey games, I'm doing - what else - riding my bike. Once again I'm back training with the fine folks at Team in Training for another go at the Death Ride. (For those of you new to my updates, this is my third year of doing the Death Ride with Team in Training. I've done the Death Ride, a 129 mile bike ride that climbs over 5 mountain passes in one day, to raise money to fight blood cancers.) Before I get to this year's quest, let me catch you up since the last update. 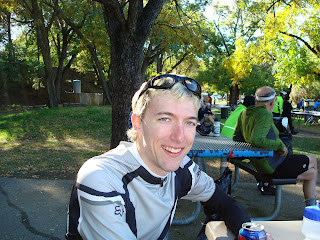 $4,116 dollars raised, 4,300 miles ridden
Last year I made a promise to ride 100 miles for every $100 donated. You contributed $4,116 and by December 31st, I had ridden 4,300 miles. Along the way I climbed over 300,000 feet or over 60 miles straight up. I had some really great rides after the Death Ride. The most notable was riding with my son, Robert, as he completed his first century ride. We did the Foxy's Fall Century in Davis. I was the proud father when after he completely bonked at mile 60, he rallied after having something to eat and he finished the ride.
Here he is at the last rest stop at mile 90.

I also had some great rides with my TnT friends. Check out this view of the vineyards in Sonoma County. Pretty incredible scenery in those parts. Of course that happened to be the same ride where I was riding down hill right after taking this picture and I had a bee fly into my helmet. Before I could stop and remo 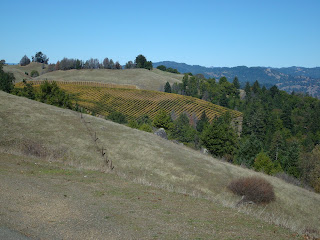 ve my helmet, the bee stung me in the head. Fortunately I'm not allergic but the side of my face hurt for over a week. I ended up having to take antibiotics before the swelling dissipated. Despite the bee interlude, it was a pretty good season. With the dwindling bee population I would have thought my chances of getting stung would have decreased. I had two stings last year - one down the shirt and one in the helmet.

So now I'm back at it. I'm going to start clogging you mailboxes with my chatter about rides, being overweight, my teammates, idiot drivers, and my quest to fight cancer. This year is a little different than past years. Instead of raising money as a participant or mentor, I'm actually a captain on the team. (I have no idea why they call us captains.) My responsibility is to help the team come together and help them attain their fundraising goals. So instead of focusing on my personal goal, I'm focused on helping my team. One of the way I'm helping my team is by doing fundraising to feed the team. As it turns out, the TnT folks provide some money to offset the cost of food for the riders as they do their training rides. That's money that can be better applied to funding cancer research and victim support. So instead of relying on the TnT folks to pay for the participants' support, the team coaches and captains are going to raise money by selling raffle tickets. All of the proceeds go to support the team. Any excess money goes to the leukemia and lymphoma society.

You Can Win Big with TnT
So here's the offer: several local businesses and restaurants have donated awards for our raffle. It's really cool stuff too. We have dinners at Bridges, Forbes Mill, Piatti, a mobile computer from Socket Mobile, several bicycling related gifts and more to come. Here's how you can help. If you would like to donate a good or service to the raffle that would be fantastic, if you'd like to buy some tickets - their $1 each or 25 for $20. To see what's being raffled go to http://www.impactzone.com/DeathRide2008Raffle/ if you want to buy tickets, then email me steve asche Tell me how many tickets you want, send me a check and I will send you as many tickets as you buy. This will really help the team. It's also a chance to win some pretty cool stuff.

So that's it for this week. If you no longer wish to receive these emails, let me know.