Back in the Game
Well it took me a while to get back on the bike, but with some trepidation and a significant outlay of cash I've completed two rides. I was off the bike for 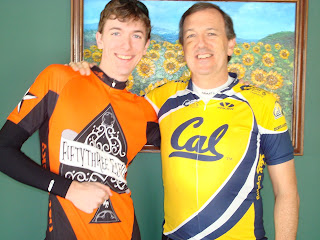 two weeks and wasn't in too much hurry to get back on. Fortunately my son, Rob, came to the rescue.

For his birthday he wanted to do something he'd never done before. This is a typical birthday request since the kids were young. Usually we go someplace to see something new. For this birthday he said he wanted to ride his bike to the top of Mt. Diablo with his ol' pop (i.e. me) Well this presented a bit of a dilemma since it was only a little over a week after the crash. Of course, I did the only responsible thing - I said "What time are we rolling?"

So two weeks after the crash, on a very cold and windy morning, I donned my trusty Cal cycling jersey, my son wore his Lucky Bicycles jersey, we started our assault on Mt. Diablo. I'm sure the emergency room doctor that treated me after the crash would have voiced a bit of displeasure. Nonetheless, family before fate, we clicked in and started our ride. 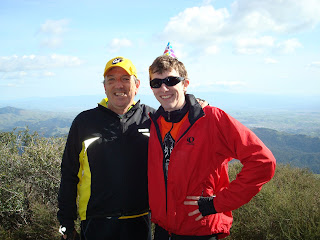 The first thing I realized was that I was hyper-aware of every pothole, crack, and bump in the road. I found that I was gripping the handlebars a little tighter than usual. Maybe the cars passing by would take my mind off of the expectation of crashing... nope that doesn't work either.

So the lad and I started talking about assorted topics from his ne'er-do-well friends, summer jobs, and cycling. Before long we were on the lower slopes of the mountain and we were joined by my friend Kim. Kim said my crash scars looked to be healing well and we talked about how well Rob was riding. Kim said that it looked like Rob could pretty much "clean my clock" on a climb. She said, I should be thankful he doesn't challenge me to race for another Xbox. (Rob beat me once up a hill by our house a couple years ago and I had to buy him an Xbox as a payoff to a boastful fatherly claim.) 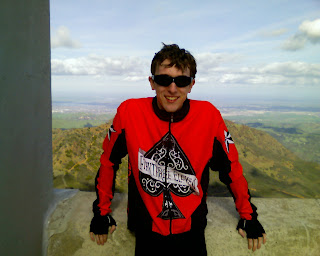 Kim left us at the halfway point while Rob and I continued to the top. Along the steep upper mountain, I told Rob that you only need to focus on the next turn or waypoint. That way you don't get bogged down with thinking about the monumental task ahead of you. Before we knew it, we were cresting the summit of the mountain. My wife Sherri, our daughter Emily and Emily's boyfriend Jimmy met us at the top with a picnic lunch. As we sat in the chilly wind, I realized that all the trepidation I had was forgotten. So my son got his birthday wish and I was back in the saddle. That was a pretty good way to get back on top.

So How About Some Raffle Tickets?
As I mentioned in previous emails, I'm raising money for the team by selling raffle tickets. We're giving away some very cool prizes - handheld computers, dinners, bike paraphernalia, lubricant, and even meat! Check it out I'm not joking http://www.impactzone.com/DeathRide2008Raffle/
If you'd like donate something or if you want to buy tickets drop me an email to this address .
Posted by Steve Asche at 8:46 PM