As you recall, I'm raising money by selling sponsorships on my bike. Thanks to everyone that's helping sponsor my bike and body. I got donations for various bike parts and even a left nipple. I don't know why I say "a left nipple" since I'm not one of those folks with an extra nipples. Anyway, there are plenty of parts and bike components available for sponsorships. Just go to my fundraising site, make a donation and name the part you want sponsored. As you can see in the picture on my blog, Pope Benedict and I are sending you our heartfelt thanks. 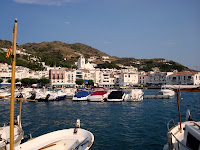 http://notabouttheback.blogspot.com/ and read about my Bike Story. As I was saying, where we last left my story I was getting ready for the first night in Spain. I was sharing a room with a bottomless roommate that had a Darth Vader breathing apparatus. The pretty much sums it up. Well almost.

Sleeping the first night was brutal. First I'm worried that my Darth Vader roomie might play some mean tricks on me, the weather was so hot it was nearly impossible to sleep. So if he did try playing tricks, I would have been on him like a spider monkey.

So the first day of riding came after a long hot sleepless night. Roy asked if I slept well, I said no. He then asked something about a teabag, I had no idea what he was talking about. I was just glad he didn't try to spoon me in the night. Anyway, we packed our bags and headed down to the parking lot where our journey would begin. 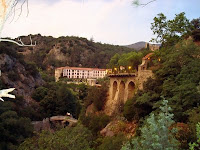 When the idea was first proposed to me to ride a bike across the Pyrenees mountains between France and Spain, I thought "How hard can it be?" The distance didn't look that far, after all, it was only a few inches on the globe at home. And besides, everything is smaller in Europe. So I figured, what the heck, I could easily ride my bike across France. Look I've been through Death Ride training with Team in Training, I could ride to the moon if I had to. As with many things in life, the reality did not match expectations.

We get down to the lot and I notice that everyone is standing in the shade. Mike is having an animated discussion with Horst, the ride organizer. Horst was smiling and laughing much like when you ta 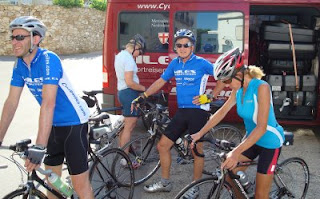 lk to someone who absolutely no idea what you are talking about but the person doesn't want to offend you. I got close enough to hear what Mike was asking Horst. Mike said "...I'll even buy the ice chest too" As I stepped from the shade into the sun, it became readily apparent why Mike was so insistent on convincing Horst to buy an ice chest and ice. It was 8:30 in the morning and it already felt like late afternoon. All I could think was "oh shoot". At this point I did the only sane and reasonable thing...I offered to double what Mike was offering Horst so he would be extra motivated to buy the ice.

Horst wasn't buying it either figuratively or literally. Besides he said, "There's no place to buy ice." I thought this was crazy. I asked him matter-of-factly, "What they don't have the recipe here?" Horst gave me a look much like you would make when you discover you have gum in your hair.

Plenty of heat. Lack of sleep. No ice. No problem. We finally set off on our ride. Now

at this point your probably wondering if I'm going to talk about every mountain pass we rode over giving you exhaustive details about the height in meters and the number of French people I saw, I won't. Here's the shortened version about day 1. It was 90 miles of torture. We climbed over three mountain passes. One pass was on the border between Spain and France where the road had been removed by the locals because they didn't want any illegal immigrant Spaniards sneaking into their country. The highlight of the ride was when my friend Andrew and I found a roadside stand that sold cool Coca Cola. Notice I didn't say ice cold or frosty. Cool is their definition of cold. After the morning and afternoon of blistering heat, sweltering humidity, warm drinking water that we had endured, a cool Coke was perfect. Andrew and I sat and drank our cool Cokes and shared that look of "What the hell have we signed up for?"

Thankfully we finished our rides, we were the last ones to come in to the hotel that evening. Everyone else had been there for some time, had enjoyed cool beers and were relaxing from the ride. Everyone was talking about how hot it was. Of course, Roy had some pearls of wisdom to share. He said "You know, this hot weather is particularly harder on heavier guys. I'm really impressed that you made it." Of course, I'm thinking that's just great. Just what I need, I'm totally beat up and now I'm being patronized...by Roy. If I had been riding at 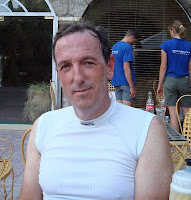 the time I would have squirted my water bottle at him or put my frame pump in his spokes. Maybe another day.

So day one is in the books. We survived. We saw some very pretty country side and we were exhausted. Only 6 more days of this. What had I signed myself up for.

Riding across France is no small feat. Surviving cancer is infinitely harder. If you have been stimulated by the Obama economic plan and have a big heart, please consider donating to fight cancer. And hey you get your name on my bike, or my body. So take a moment, dig moderately deep, and go to my fundraising site.

Stay tuned for my next update and find out if riding across France has any redeeming qualities.
Posted by Steve Asche at 10:03 PM