Whatever happened to Steve Asche? We used to get these regular updates about Team in Training and his trip across France. Then he dropped off the blogosphere. Did he ever make it across France without more uncom 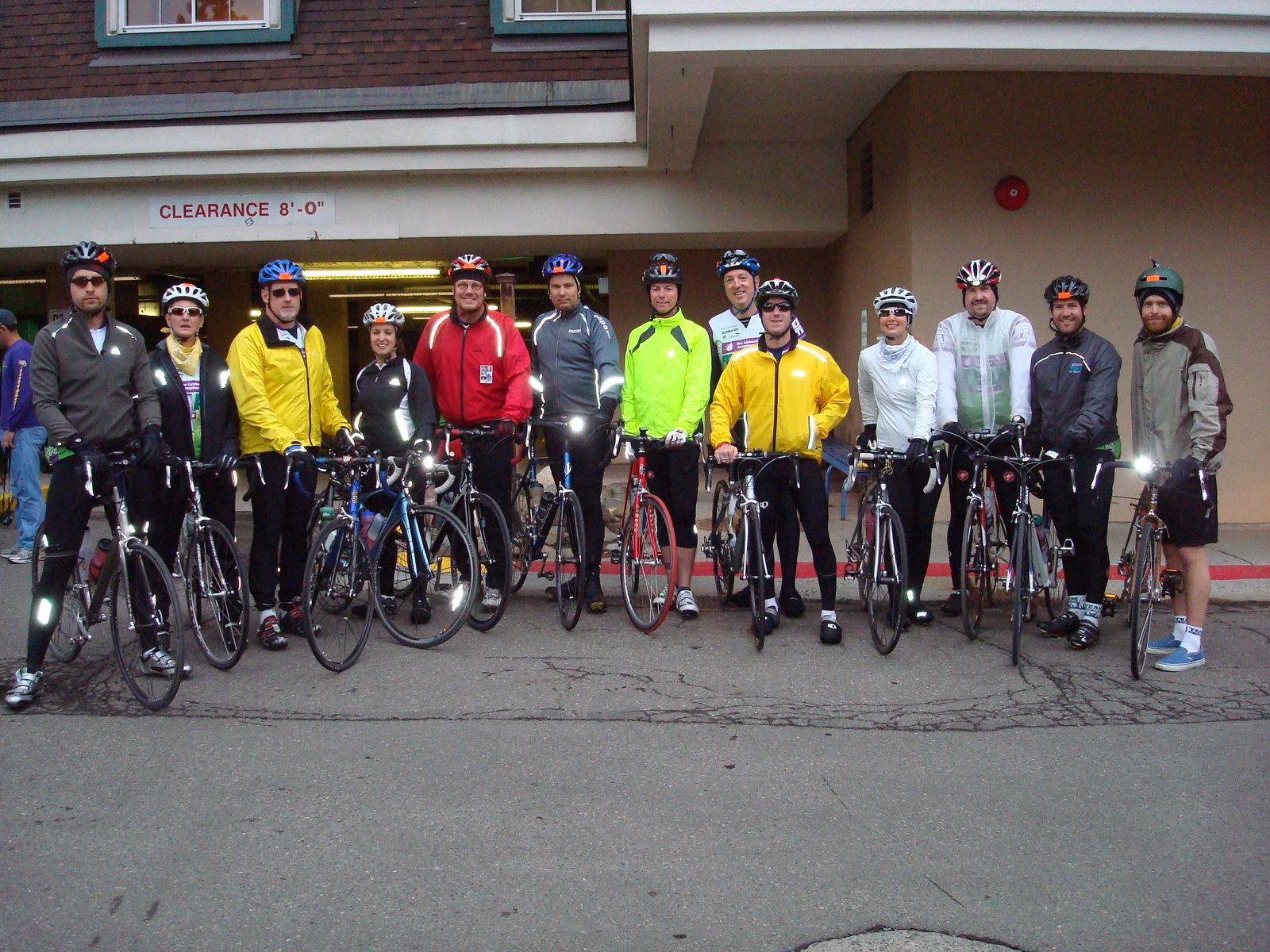 fortable moments with Roy? Did America's Most Beautiful Bike Team ever complete their century ride? What about the sponsorships with all the names on the bike?

Well it's about time I got around to this. To say a lot has happened since June would be an understatement, I'll provide those details in future updates.

Let's get to the most important question - Did America's Most Beautiful Bike Team make their 100 ride around Lake Tahoe?

Of course they did! And they did it in epic fashion. Team Shake 'n Bake would have flown around Lake Tahoe if they could - that and if they had wings and sufficient thrust and all the other physical requirements. The team did fantastically well despite some very, very cold and wet conditions the day before.

The team got up there th e day before and we'd planned a tune-up ride. This was a 10 mile ride from the hotel just to get people acclimated to riding at altitude. Of course what we hadn't planned on was cold rain. I debated about whether it was nobler to check into the hotel and take a hot bath or take the team for their tune-up. I opted for the latter. We went for a ride in 40 degree rain and all I could think is people are going to get hypothermia. We were miserable and soaked. On top of that, the weather forecast for Sunday said more of the same in the morning. Great, train all spring to have to face a bitter cold ride. On the plus side, at least there was no concern about overheating. Three weeks earlier we nearly exhausted the team by taking them on an 80 miler in 100-plus heat in Livermore. So now they're going to get the other end of the spectrum. Fortunately everyone survived the ice cold tune-up.

A memorable part of the ride was going up Spooner Summit with Julie Reed, one of the esteemed Shake 'n Bakers. I rode with her the 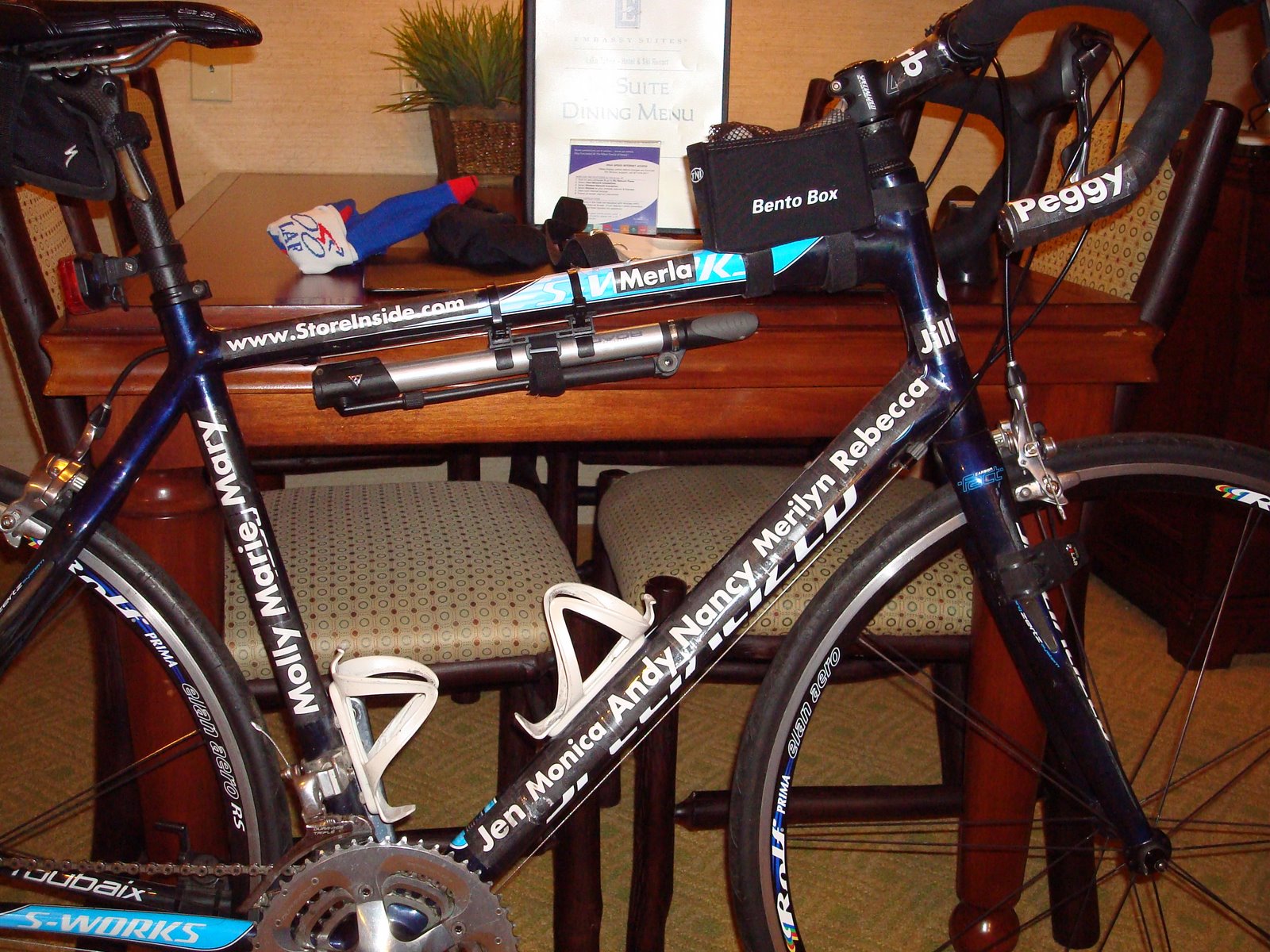 whole way up the 7 mile climb. Along the way we passed dozens of TnT riders from all over the country. Julie was maintaining an aggressive pace. With about a half mile to go, I told Julie that we had just a little farther, pointing out that the top was up ahead around a curve. With that notice, she put the hammer down and started passing everyone. She had a full head of steam and she was not going to be denied. The Shake 'n Bake team regrouped at the top of Spooner and we made the downhill run back to the starting line. The best part of the ride was finishing as a group at the finish line. Check out the picture.

What about the bike sponsorships you ask? It had snowed at the higher elevations around Lake Tahoe a couple days before. Nonetheless I made individual stickers for my bike and had applied every sponsor's name to the frame, forks, and handlebars on my bike. I carefully taped each name down so the wind wouldn't mess cause and incessant flapping as I was 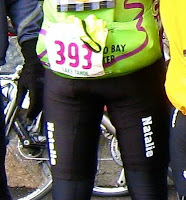 riding. It was a work of art. I even had provisions for writing my name on various body parts. I'm sad to say the body part plan was shelved because it was way too cold to have exposed skin. I figured you'd prefer visibility. So everyone that sponsored me got a placement. One special sponsor, Natalie Jenkins, had made such a generous donation that she bought the spot of honor. Yes, those are my shorts.

So what about Roy?

Well after I blew past Roy on Col de Mente, we rode into Luchon. Luchon is a resort town in the center of the Pyrenees. We got to rest for a day and see the sites. The next day we would be climbing our legs off as we would tackle Le Tourmalet. I know, you're disappointed that there are no Roy stories this time. He'll be back, don't worry.

o everyone that bought sponsorships on my bike. We raised close to $3000 to fight Leukemia and Lymphoma. The fight continues. Every day we get closer to a cure.

For this Thanksgiving I would like to thank you for all your generous support.