So you may recall from my previous post that I promised pictures of my puppies in exchange for a donation to support the Leukemia and Lymphoma Society.  Not to fear, the pictures will be on their way.  That is, after Rudi, our little Spinone Italiano puppy grows his fur back.

The poor little guy had to have surgery on his eye,  He's okay.  In preparation for the surgery, they had to shave half of his face.  No big deal; not great but not ghastly.  Well after he had his surgery, he had to wear the cone of shame for about two weeks.  When we took him to have his stitches removed, the fur on the top of his head was all matted from the cone of shame rubbing on it.  So after the indignity of having half his face shaved, the top of his head is shaved - pretty much like Friar Tuck.  Now he looks like Two-Face from Batman lore.  That is, if Two-Face was a friar...and a dog.  Anyway, we'll send the thank you pictures once he has grown some of his hair back.  For a seven month old puppy, he's had to endure a lot.

Speaking of thank you pictures, I want to thank the folks that donated over the last few weeks. I really appreciate your support.  The ride is coming up and I appreciate any support you can provide to help support the fight against blood cancers.  Want to know how?  Just click the link here

Speaking of enduring, we're about a month away from the big 200 mile ride and as if on schedule, something has gone wrong.  Those who have followed my blog know about back surgeries, crashes, and other problems.  Now the problem is a pinched nerve in the neck.  For something as benign sounding as a "pinched nerve" it sure is painful.  Painful as in, unable to sit on a bike and lean forward. 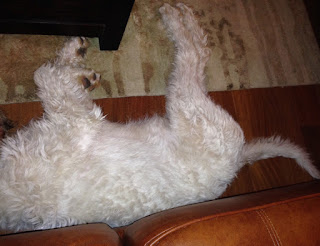 Since I didn't want you to go without a puppy picture this week. Here's Rudi after his surgery.  Of course, it's cropped for his dignity.

Once again, I appreciate your support.  It's simple. It's fun and you get a picture of a puppy.
Please Support the Fight Against Blood Cancers