A Near Death Experience
Since the last time I wrote, I have discovered new levels of pain and excitement. In a 19 day period I rode 560 miles and climbed over 52,000 feet. On Memorial Day I rode up Mt. Diablo three times, the following weekend I rode the Sierra Century followed the next day by riding the America’s Most Beautiful Bike ride century around Lake Tahoe, the following weekend we went to High Altitude camp and endured two days of pain, finally capped off by riding Mt. Diablo over three times. And of course the answer to the obvious question is, “Yes, my butt is sore.” Some of the more memorable experiences were riding to the top of Ebbett’s pass at 8723’ and having snow banks piled over my head on both sides of the road, passing a frozen lake, descending at 47 miles an hour and have a high-speed wobble develop in the rear wheel. A high speed wobble is like your bike getting the shakes. If the bike were an animate object it would be telling me “Aaaiiee! Get off me clydesdale we’re going too fast.” There’s nothing that raises your heart rate quite like blazing down the road and having your bike tell you, “I’m trying to shake you loose.” A trip to the bike shop to tighten some spokes should shut the bike up.

Scott’s Big Ride
The most memorable ride was the one around Lake Tahoe. I promised my friend Scott Leatherman that if he signed up for Team in Training that I would do the ride with him. Scott signed up to do his first century with TnT. The ride they prepared him for was America’s Most Beautiful Bike Ride (AMBBR). After riding a very hilly century the day before, I rolled out with him at 7:00am on Sunday morning. The weather was great and the views of Lake Tahoe were spectacular. Since this a national TnT event, there were 3000 riders from all over the country. Additionally there are thousands of supporters along the sides of the road for the whole ride cheering you on. There’s nothing quite like having fans. I started out by smiling and waving at the cheering throngs and transitioned to getting “high fives” from people along the route. Had I been out there longer, I would have started giving hugs and kisses. Though I suspect the supporters did not want to touch a big, sweaty, cyclist. 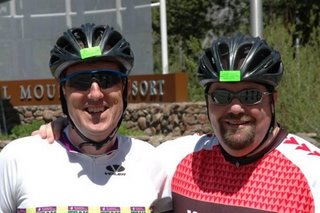 Scott is not the type of guy you usually see on a bike. He used to be a football lineman in college. In other words, he’s un-svelte. He thinks I’m thin – ha! Scott made it the entire 101 miles and climbed over 4000 feet. Given the particularly strong gravity that day, that was pretty impressive. He literally worked harder than 95% of the other riders out there.

On the last climb up Spooner Summit, a 5 mile climb, Scott would tell me to ride ahead and wait for him at the top. I’d go ahead to the next rise in the road and wait there. As I waited there the most irritating thing happened. As I’m standing there, first time century riders would be going up the hill and they’d tell *me* things like “It’s the last hill. You can make it don’t give up.” At first, I’d smile and say I’m fine. Scott would come rolling up, I’d ride with him a while and go on the next rise. Again, while I was waiting at the next rise people would tell me that I should just keep trying. Now I’m annoyed. I get it, I don’t look like a cyclist. That doesn’t mean it’s my first time here. At least I got some consolation. Generally at the rest stops you talk to the other cyclists and they ask if this is your first century ride. I’d respond with, “Actually, no, I rode one yesterday too.” The stunned looks were priceless.

On Fundraising
I’m near the $7000 mark. If you want to make a donation, here’s your last chance. We need to have our collections done by June 23rd. Thanks to all of you that have been supporters. If you’re still on the fence, it’s for a good cause.

Watch Out for that Food
Every long-time road cyclist has a story about someone throwing food at them. Typically, they’re burritos or sodas. A friend of mine said he had a hamburger hit him square in the chest. Usually the culprits throw the food at you from their fast moving cars. Leaving you no chance to catch them or, ideally, return the favor. My son has the best story of such an incident; and since he doesn’t have his own blog, I’ll tell it here.

My son, his friend and his friend’s younger brother were on their bikes heading along a busy road to the store. A white car with four guys in it passed them. As they passed, someone threw a burrito at them, hitting the younger brother. Further down the road, they spotted the white car in waiting at an intersection for a left turn light. My son and the older brother thought since there were four guys to their two and a half, and that they had a car vs. their bikes, it was best to let the issue drop. Of course, they neglected to tell the younger brother this. So, as they passed the stopped car, the younger brother took his water bottle, which contained red Gatorade, and sprayed it through the open windows of the car containing four, now very wet and angry, guys. A fact that my son and the older brother didn’t realize until they heard the yelling and the tire squealing as the car was trying to accelerate out of the left turn lane. I’m sure at this point, several thoughts went through their heads about chastising the younger brother, but the immediate need for self-preservation did not give them an opportunity to ponder them. Fortunately, they were near the shopping center parking lot. They took off into the parking lot with the white car in hot pursuit. They jumped islands and maneuvered through the parking spaces; eventually cutting behind a car that was backing from a parking stall. The car blocked the way for the white car. Despite 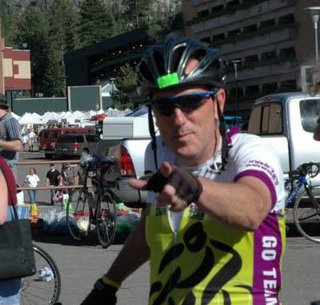 the white car’s insistent honking, they were able to make a narrow escape. I don’t recommend this tactic as a practice. However, it certainly gives the rest of us some satisfaction that someone got their comeuppance.

Stay tuned for the next update
Next time I’ll have completed several more hundred mile rides. With the temperature increasing, it should be loads of fun. In the meantime, check out the blog and tell your friends and neighbors to sponsor me.
Posted by Steve Asche at 2:54 PM