Welcome to the next to last installment of my latest challenge. Over the past few months, thanks to your generous donations, I’ve raised over $7,200 to fight Leukemia and Lymphoma in honor of my mother-in-law, Margie Griffin, who passed away from leukemia last August, and my friend Stacy Bowman, who is a leukemia survivor. I’m close to my $7,500 goal with a week and a half to go until the Death Ride – a one day, 130 mile ride, climbing 15,000 feet, over 5 mountain passes.

In my last update I wrote about the grueling challenges that our coaches had cooked up for us. One would have thought that they had exhausted their list of torturous routes. We were wrong. Have you ever said, “It can’t get any worse.” Only to find that things can, and do, get much worse. This is one of those times. They told us last week that this last Saturday we’d be doing the “Vertical Challenge”. As the week wore on, the temperature started to climb and what was to be a challenging ride became…

Hell on Wheels
The forecasted high for this last Saturday was an unpleasant 103 degrees in the shade. The team was a little concerned about the riding conditions. The plan was to ride 102 miles and climb 11,000 feet. Seeing the dilemma, the coaches decided to alter the route to a pleasant 90 mile ride with 8000 feet of climbing. And since they actually ride the route with us, (remember they’re sadists, not masochists), they wisely recruited more SAG support. SAG support, for those new to this cycling thing, stands for Support and Gear. These are volunteers that are stationed at points along the route and they provide food and water to keep the team going or, in this case, upright. 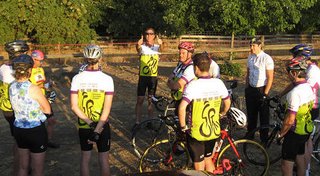 The ride started pleasantly, much like the Titanic’s maiden voyage, with the temperature at 78 degrees. We started climbing Mines Road just south of Livermore. Oh by the way, did I mention it was 6:40am. By 8:15 at the first SAG stop, the temperature was 84. By the time we got to SAG stop three at mile 40, at the base of Mt. Hamilton at 10:10, the temperature was in the 90s with no intention of going lower. Now the fun begins.

For those of you that have not been to the back side of Mt. Hamilton, this is likely the most desolate part of the Bay Area. Known as the San Antonio Valley, no one goes there, and for good reason. This is a sun-baked section of rolling farmland. You’ll find a few ponds that are usually dry by mid-summer, some rocky ridges, and very little shade. The only wildlife I saw were vultures that reluctantly abandoned their roadkill feast when we rolled by. The brown menace (squirrels) didn’t show themselves because they’re too smart to go out in this heat. 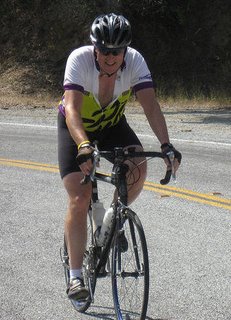 For those scoring at home, that’s over a 7% grade -- typically regarded as steep by most motorists. As I started up I noticed two things, one that it all of a sudden got much hotter and two, my heart rate decided to climb faster than the temperature. As I climbed through the sun scorched landscape certain things caught my eye – the oil in the asphalt was starting to liquefy. There were patches and bubbles of oil that I made a note of to avoid on the way back down. There are also several hairpin turns where the road gets considerably steeper. After an hour and two minutes and having expended over 1000 Calories I made it to the SAG stop at the top of the mountain. The fast thin riders were already there. I took some consolation that they didn’t look any better than I did. (except for the fact that they actually look like cyclists) After two cokes, water, an otter pop, and a sandwich, I headed back down to the valley that earlier in the morning was at 90 degrees. After a slow descent and an emergency stop to shake a bee out of my helmet, I made it to the bottom of Mt. Hamilton. I noted the temperature - 103.

The road through the San Antonio valley has a couple of substantial climbs with several sections of the road edged by a rocky canyon wall. The combination of direct sun, little breeze and reflected heat from road and rocks made for a blistering combination. The temperature on my bike computer is saying it’s over 110 degrees. At one point it recorded a high temperature of 121. And that’s when the leg cramps started.

Most people’s experience with leg cramps usually happen when they’re relaxing at home or sound asleep. Your muscles involuntarily, and painfully I might add, contract. Usually people try to “walk it off” hoping to stretch the muscle and relieve the pain. Since I’d have to be a Chinese acrobat to walk around on my bike, there’s only one thing to do – gut it out. Cramps are caused by a lack of electrolytes, which get depleted when your body sweats. Cyclists take electrolyte tablets to counter this depletion. However, if your body is sweating an extraordinary amount, it’s hard to replenish them fast enough. I don’t have to be a doctor to know that 110 degree heat likely promotes excessive sweating. I made a conscious effort to drink more fluids and take more electrolytes. 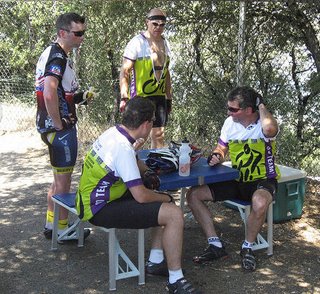 I rolled into the rest stop at mile 65, which looked like the heat stroke victims unit at a Day on the Green concert (Lollapalooza for the younger audience, Woodstock for the old folks). Everybody, including the SAG volunteers, was feeling the heat. The temperature on a gauge in the shade at the SAG stop said it was over 100.

I rolled out of that stop and braced myself for two long, slow, and hot climbs. At a snail’s pace I made it over the two climbs. Thanks to the alert roving SAG people who cooled me down with cold water when they found me sitting in the shade on the side of the road. I made it to the last stop with 15 miles to go. I sat for 20 minutes with a cold wet towel over my head. Finally I was ready to end this ordeal. With minimal energy and some abatement from the leg cramps I slogged it back to the cars.

I figured I drank 8 - 24oz bottles of water, 5 sodas, two Red Bulls, and an otter pop. That’s over 2 gallons of liquid! My clothing and skin was so salt encrusted I looked like a human pretzel

Three riders had to be SAGed back to the cars. Under normal circumstances they’d have been fine. Thankfully, the SAG folks were there to help us through. If this doesn’t make us ready for the Death Ride, I don’t know what will.

Stay Tuned – Next up, the Death Ride
You don’t want to miss the thrilling conclusion of this challenge. Look for the next and final update to come after the Death Ride. The ride is on July 8th in Markleeville. Will the Clydesdale ride to victory or will he be dropped at the side of the road like about half the people that attempt the Death Ride? Can we find humor in such a grueling endeavor? Will all this training be undone by a squirrel with a grudge?
Posted by Steve Asche at 3:05 PM

you certainly LOOK like a bike rider! :-) congrats, this is awesome!