An Exercise in Humility
The dictionary defines "hubris" as "overbearing self-confidence, arrogance". Shakespeare often wrote about protagonists that had hubris and became victims of their own arrogance. Well I don't know if it was a case of hubris, but this year's Death Ride was a humbling experience - to put it mildly.

I came to this year's ride having trained more than I'd done before. I lost 20 pounds in the process and I was riding exceptionally well. I conquered the last few training rides with energy to spare. On each ride I finished strong and felt great. The training was right, the weather was right, all signs pointed to a ride where I'd easily beat my previous times. I'd ridden the route 4 times before, so I knew exactly what to expect.

The day started cool at 5:20am. I started well, keeping my heart rate below 140 beats per minute. I climbed the first pass in an hour and 20 minutes, 10 minutes better than last year. Things were going well, though something didn't feel quite right. I attributed it to the lack of sleep the night before, having had only three hours of sleep.

The ride down Monitor Pass to Topaz Lake was spectacular for its scenery. It's still breathtaking to see, as the sun was low in the morning sky. As I headed down, I saw many of the people that had left at 4am making their way back up. I thought I'd likely catch them on the next pass. At the bottom of the pass I refilled my water bottles. I filled my bottle from a cooler; I looked in and it was brownish colored liquid that looked like iced tea. I asked the volunteer what it was and he said it was Cytomax. At this point I should have dumped it out and refilled it with plain water. I resisted dumping it out because my water bottle had ice in it and the water at that rest stop had no ice. Since I knew it was going to be warm, I thought it would be better to have the cold liquid than the air temperature water that they had. So I left the rest stop with a bottle of Perpetuem and a bottle of Cytomax.

Not too long after I began climbing I felt sharp pains in my intestines. Every time I pushed my heart rate over 150 beats per minute or I drank water, I'd get another bout of intestinal cramps. I figured once I got to the top, that the problem would go away. I rode to the top of the second pass, but it took 20 minutes longer than I had expected. That clearly wasn't right. I was riding with one of my teammates, Janet, and said I really needed to stop at the top, since I wasn't feeling well. I made a couple trips to the port-a-potties at the top of the climb. Janet asked if I was okay, I said "no, but it should be okay" I went to fill my water bottle and realized that only a quarter of it was gone. Since the water/cytomax was causing my intestinal cramps, I unthinkingly drank too little water.

I thought since I replaced the water in the bottles, that I should be okay. We made it over to Ebbett's pass. Ebbett's is an 8 mile climb, the last 6 are fairly steep. But it was nothing I hadn't handled in the past. At the bottom of Ebbett's I made another stop to see if I could quell the intestinal cramping. I drank some water and packed my water bottles with ice. I thought, I could still recover.

As I started climbing the 6 mile climb on Ebbett's things started going slower and slower. In previous rides I'd climb it at 6mph or greater. I was lucky to get my speed over 4mph. Every time I pushed, it set off another set of stomach cramps. So I kept my speed low and pedaled on. If the stomach cramps weren't enough, the first leg cramps hit with about 3 miles to go to the top. To keep things in check I went slower trying not to push too hard and trying to keep the heart rate down. I made it over the top at 12:45. I was an hour behind schedule.

I made to the other side of Ebbett's and turned around to climb the fourth pass. When I'm rested I can do the fourth climb in 45 minutes. In previous years it took an hour. I was not that lucky. It took over two hours to climb the fourth pass. Several times I had leg cramps in both legs from my thighs down to my calves. By the time I made it over Ebbetts and back towards Markleeville, I was two hours behind schedule. I knew that I had a four mile and a seven mile climb ahead of me to make the last cut off. I couldn't push more than 3 miles an hour uphill. I realized that even standing initiated another round of cramps. At that point, I hit my lowest point and had to call it a day. There was no miraculous five pass recovery. There's a saying that goes, "sometimes you master the mountain, sometimes the mountain masters you." Today, the mountain won.

After the ride, I just wanted to rehydrate and keep from cramping. So I sat at the end of the ride and applauded as the other teammates came in to the finish. It was great to watch fellow team members finish their grueling test.

That night Sherri and I went to a quiet dinner, where I was considerably less than ebullient. I went to bed and woke up at 2am. The day's events played over in my head as I lay in the quiet room. In the morning, Sherri woke up and asked how I slept. I told her I didn't. She said, "I know it's bugging you; why don't you go finish it today after breakfast." I thought, that's not the same. But I realized, that I can't change the past anyway, so I might as well prove to myself that I could do it.

Unfinished Business
So after our farewell breakfast with my teammates, Sherri and I drove 25 miles from South Lake Tahoe to Markleeville and I picked up where I left off. I got on my bike and my muscles immediately objected. It was as if they were saying, "We need to rest, why are you doing this to us?" I didn't listen and the tightness and aches worked themselves out.

Unlike the day before, there were no other riders out there. I was the only rider on the road that day. I rode past the general store and the courthouse lawn, where the crowds were the day before, only to get a few curious stares from customers at the store. I rode past the empty campgrounds at Turtle Rock Park, where a few workers were cleaning up the refuse from the previous day. I rode past the rest areas at Woodfords and Pickett's Junction where the only person cheering me on was my wife as she waited for me to pass. I rode all the way to the top of Carson Pass. At the very top of the pass, I rode by a couple that were out for a hike. The woman asked if had done the Death Ride the day before. I told her I had. She asked, "Well, why are you riding today?" And before I could answer, the man said, "He's just doing it for himself." He couldn't have been more right. I waved and rode off, completing my "extended" Death Ride. 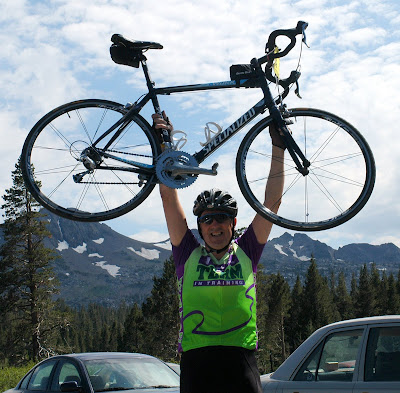 I was watching the Tour de France last night as I saw a race favorite, Michael Rogers, go from leading the race to having an untimely spill, to having to completely abandon the race. Like with other Death Rides, I learned a valuable lesson. With this ride I learned that even though you plan everything right, something can always go wrong. As part of the fight against Leukemia and Lymphoma, I've heard of patients the same age, fighting the same disease where one goes into remission and the other doesn't survive. Sometimes it's just not your day. Not that my experience is equivalent, but the lesson I learned is that I should always be humble and thankful for what I accomplish.

Thank you for enduring my blog updates and thank you for supporting me and my fundraising this year. I'll hope to do the Death Ride again. I'll keep you posted of my campaigns and challenges. But I promise that I'll never take anything for granted. Visit my blog at http://notabouttheback.blogspot.com/
Posted by Steve Asche at 9:33 PM