I got more than a few disappointed emails when readers went to see my walnut crushing exploits only to find out it was a cheap ploy to get people to the fundraising site. Okay, I admit it was an underhanded act on my part. I apologize profusely and will figure out the walnut crushing exploits at a later date. In the meantime, I have another Death Ride to do. That's right, I've completed my fundraising. Thanks to everyone who has sponsored me. You've contributed $3,891 towards fighting Leukemia and Lymphoma. Thank you very much.

I am still committed to riding a mile for every dollar raised. I've ridden over 2,800 miles so far and will continue to ride until I exceed the fundraising amount. I capped the limit at the fundraising deadline a couple weeks ago, but it may be the wine talking here, if anyone wants to make a last minute donation I'll gladly ride those miles too. Here's the donation site http://www.active.com/donate/tntgsf/steveasche

Quick Like a Bunny
I had an interesting experience tonight. I was on my ride home from work along Squirrel Alley and a jack rabbit decided to race me along the trail. He hopped alongside me about 10 feet to my right and kept pace with me for about 75 yards. I don't know whether he's fast or I'm fast but it was pretty cool to have a rabbit matching my speed for a long way. I don't know whether he was doing it to impress his friends or he was trying to get at me. Either way it was pretty cool.

Am I Nervous? Heck yeah, I'm Nervous
I've been watching the weather report for the mountains and it's supposed to be pretty hot on Saturday. It's bad enough to have to deal with the effects of gravity, heat is my other enemy. So I've been drinking gallons of water and have been trying to build up water stores like a camel. I'm sure I'll have a mighty hump by the time of the ride. There's so much that can go wrong that it's hard not to thing about it. My wife is going crazy because I have to double check everything just to make sure I don't forget a critical piece of clothing or supplies. I also have to adjust my sleep patterns so I can get up rested at 3:45am on Saturday morning.

And now for something completely different
On a recent ride someone had just took a long turn at the front of our paceline. A pace line for the non-riders is a line of cyclists following close behind each other. Each rider takes a turn at the front, "a pull", drops off and lets another rider take over the front. The first rider goes to the back of the pace line. The pulling and dropping off continues as long as they stay in the pace line. Anyway, as the first rider dropped off and was heading to the back of the line, the riders that passed him said "Thanks for the long pull". At that moment, as happens often, the expression struck me as somewhat - shall we say...naughty. It's certainly not an expression you'd hear in common discussion. I made this observation to the rest of the group and we came up with other cycling expressions that sound dirty, but aren't. So here they are in no particular order.

Thanks for the pull
You were really hammering
You shouldn't twist your nipples more than a quarter turn at a time
You should lube your chain
Did you butter your shorts?
You should put some lube on your post before inserting it in the seat tube 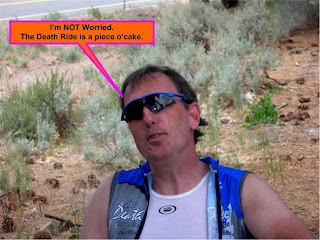 I've ridden a bunch climbed a bunch and have tried to get every edge in my favor. Now all that's left to do is ride it. Apparently, according to one of my teammates he thinks I have it in the bag. This picture was taken after a relaxing beer at the end of one our rides. Stay tuned for my post after the ride.
Posted by Steve Asche at 10:17 PM